Review for THE PROMISE OF LIVING

Thank you, Christina from Christina's Bookshelf (www.christinasbookshelf.net) for reviewing (with 5 stars!) my YA novel THE PROMISE OF LIVING.
I can't say enough how honored I was to get your review. Here it is:

A review for THE PROMISE OF LIVING

Thank you, Jack, for taking the time to review my novel! Go to his blog because he is a great lover of books. Mahalo nui loa!
https://jackdanfabbooks.wordpress.com
Genre: LGBT, Coming-of-age, Young Adult, Contemporary

“Despite the grounded daily activity of milking the herd . . . Ryan knew something terrible was about to happen.”

Ryan has been having visions. They come to him at random intervals, showing him suicide and murder. Will those visions save the man he loves?
Ryan Colton’s boredom of Wilson’s Ferry is shoved aside when he gets a vision of a murder of a high school peer. With the help of city boy, Skylar, he discovers how to control his visions in an attempt to uncover the truth behind the murder. While Ryan is in Boston, he comes to terms with his sexuality, embracing his identity for the first time.
I’ve not read LGBT fiction before. I’ll be honest, I was expecting to read explicit material – limbs akimbo and private parts waving. I breathed a sigh of relief when this was not the case. The characters’ orientation was not central to the story; it could have been taken out and the narrative would have stood by itself. This is what good LGBT fiction should be. A story about people who also happen to be gay. As a gay man myself, the book felt very authentic in its dealing with the issue of ‘coming out’ and handled the feelings of a person accepting themselves very well. This coming-of-age story has a well thought-out plot that threads everything together smoothly and the descriptions of small town life is clear, without unnecessary embellishment.
The writing is superb. There were a few lines that felt a little messy, such as “He grabbed his own books under his right arm and left.” It’s clear what was meant but the two directions did distract me from the natural rhythm – momentum – that was nicely built up throughout the story.
The characters were relatable and felt very authentic. If I was to sum the book up in a single word it would actually be ‘authentic’. There was no extravagant event included for the sake of entertainment. It was a real story about real people.
The Promise of Living is a book I wanted to read. Whenever I had to be somewhere, I wanted to take it with me. I needed to know what happened next. If you’re looking for your next read, here it is!

“I love you, Ryan. I’ll always remember the blond trombone player in the farmer t-shirts and the red John Deere cap.”

I was kindly gifted a Kindle version of this book, by the author, in return for an honest review. Thank you very much to J. Lee Graham.

In the week coming up, well, next week, too... such an 'odd' week of birthday and event anniversaries that all strangely fell during the same seven-ten days:
Hitler's Birthday: April 20
Titanic Sinking: April  14/15
The American Civil War, April 12
and so many more!

On April 18, 1906, the Great San Francisco Earthquake occurred. That has always fascinated me, even when I walk the streets of that city, wondering what it would have been like. I did  a lot of research when I wrote THE TIME OF HIS LIFE, Andy Mackpeace's Second Time Travel Adventure, because he and Miranda accidentally end up there.

An excerpt from Chapter 6:

Opposite Andy was the stairway leading down to the first floor. It too was intact and still attached to the wall. At the top of the stairs was another bedroom door. Miranda stood in that doorway, motionless.
“Miranda!” Andy yelled. “Are you okay? What is this? What happened?” His friend didn’t respond.
“Miranda!”
Miranda was a very intelligent girl who clearly understood an earthquake when she saw one, but she was also a girl from New Hampshire where earthquakes were not likely to happen. Reading about them and experiencing one were two very different phenomena.
“Miranda!!” Andy shouted again.
“It’s an earthquake,” she yelled, snapping out of her shock and coming to her senses. “We have to get out of here!”
She headed for the stairs when the second, more deadly tremor hit. Miranda was thrown forward by the shock and her face hit the steps. At the same time, Andy was shoved to the ground backward toward his bed. He had no more control over where he landed than if a quarterback had picked him up and heaved him.
As much as he tried, Andy couldn’t get up. Another quick BOOM! and the massive bed lifted up, fell over and buried him up to his waist. The large wardrobe keeled over too, and Andy barely had time to cover his head with his hands. If it weren’t for the fullness of the bed acting as a cushion, Andy would have been crushed.
As the house rocked, a terrific screeching noise started to happen. The stairway was wrenching loose. With every BOOM! the stairs pulled away a bit, then slammed back into the wall. The nails holding it together were coming undone with each pull and slam. Like a stubborn dog playing tug of war with a toy, the stairs moved out from the wall, then back, then out, then back. With each tug, the stairs grew shakier and shakier.
The house groaned and when the nails popped, the stairway came crashing down, the steps, the railing, the carpet, all of it. It folded into itself and landed with a giant heap on the first floor hall. Dust and dirt swept up and around Andy like someone had emptied out a giant vacuum cleaner bag.
Once again, the earthquake stopped.
Silence.
Andy opened his eyes. He coughed and spat out the dirt that filled his mouth.
The house, by now, was completely tilted. The room, the floor, everything was leaning toward the stairway, or rather, where the stairway used to be.  Andy pulled and struggled and squeezed out from under the bed and looked over at Miranda’s bedroom.
Miranda was gone.

THE SCULPTURED ROCKS in Hebron, NH and Illustrator Ken Hornbeck 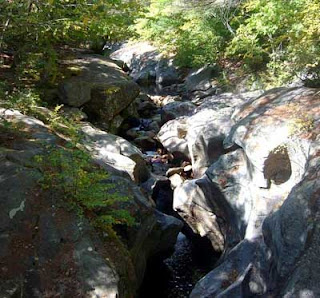 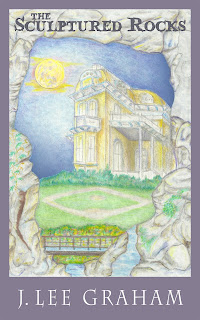 Sculptured Rocks, swimming hole: Hebron, NH
As a kid, I always loved a book cover that combined the various themes read within its pages. The fun part was looking at the cover and wondering what the various images had to do with each other.
When collaborating with Ken Hornbeck, illustrator for all my novels (Except THE PROMISE OF LIVING), he instantly understood my desires.

For example, in THE SCULPTURED ROCKS, not only does the main character Dan go to the Rocks, a local swimming hole (the picture is above), but also deals with a haunted house and being on a baseball Little League Team. I wanted to incorporate all three major themes and Ken did this terrifically. In the cover you can see the house, the rocks and the baseball diamond.
The big bonus is if you closely enough, well, can YOU find the ghost?

All my novels are available on Smashwords and on Amazon.

I love New Hampshire. All my novels are set there and even to this day, the state gives me such pleasure. I really enjoy, as a writer, finding a setting I resonate with and have a heart connection so that my characters feel just as home there as I do.

Spring is here. Birds, buds, flowers, bushes, and sunshine. It's all very, very sweet yet the sound of sadness does, at times, permeate the air.

A great time for reading a book, getting centered, doing some yoga and (perhaps the best cure of all) going OUTSIDE and planting things: flowers, vegetables, ideas. Rake, clean, cut the grass, volunteer to clean up your community, create a change that makes you feel like you contributed to something bigger than yourself.

I'm reading My Name is Lucy Barton by Elizabeth Strout. I'm only five pages in and already I'm nodding my head saying, "You go, Ms. Strout!" Thank you for moving me with your writing.

A great nod to Rebecca Stead

I just finished reading Rebecca Stead's Liar and Spy and was very glad to see a male protagonist who actually has emotional, vibrant, living breathing, what else can I say, organic relationships with other characters in the novel. It was reassuring that a piece of work written for Middle Grade could still have the capacity to move me.

Frankly, I don't resonate with adventure stories where the protagonist (male or female) simply zips around from hair-raising adventure to another without a moment of reflection or emotional recovery. While I understand that sometimes an adventure is just an adventure, those types of stories are not for me. I think a truly good story has to have, at its center, a heart.

In my novels, my male protagonist has some kind of visceral connection with other people, especially another male. In the time travel series, Andy's best friend is Roger; in book 3, All the Time in the World, Andy also finds a role model in Eric. In The Sculptured Rocks, Dan has his best friend, Tom, as well as a bully named Krenshaw. Later he meets the young farmer, Nate. In The Time of His Life, Andy meets Jake Hollis at the camp and of course, in The Promise of Living, Ryan and Dave are inseparable.

But to continue with Stead. She has the ability to sum up a whole slew of emotions by one simple sentence. When the protagonist starts 7th grade, a minor character, Jason, has the ability for him to reflect:
"I go back to thinking about Jason, who was my every-day-after-school friend until the end of sixth grade, when he went to sleepaway camp for seven weeks and then started sitting at the cool table in September like he'd been there all along."

Way to go, Ms. Stead! That says so much and you do it so extremely gracefully without a bit of self-pity.
Here's another sample: if you've read the book, you'll know the backstory. If you don't, no worries, nothing is spoiled:
"Bob draws Candy's blue dot, making a perfect circle and then coloring it in.
When he's done, she looks at it up close. "So what does this mean again?"
Bob tells her. "It means you're not alone. No matter what."
The book is filled with extremely tender moments, and they often took me by surprise. While Ms. Stead certainly doesn't need my Seal Of Approval given her recent success, I can't wait for her next book.
Posted by J. Lee Graham at 12:12 PM No comments: